From past few years JavaScripts components on GIT Hub are increasing like anything and each one of them are fantastic hardly unneglectable. So for a JavaScript developer it is a time consuming process to test one by one and identify out the best suit as per his other component suits to make best mixed-match

Simple one liner for CommonJS

CommonJS is a specification which helps to load modules from one file to other file.

Two JavaScript developers will follow CommonJS specifications in order make their module communicate with each other. In order to make it work practically, one file gets exposed while the other file will be using that exposed file.

Before moving ahead let’s have a shallow-dive in understanding CommonJS. Below we move on for the same.

Goal of CommonJS or why CommonJS came into existence?

"CommonJS" initiative was started back in January 2009 by Kevin Dangoorwhen he was working at Mozilla with name "ServerJS"and later renamed it to "CommonJS"in the same year 2009 in the month of August.

Now it is widely used and well-known between JavaScript developers as CommonJS in Angular.

The two important and used keywords in CommonJS are "exports" and "require". The keyword "exports" will be used in the file which wants to get exposed to the external world. So with that it will get enabled to be readily available to the file who wants it.

Unless the "exports" keyword is used consumer or the file which is trying to use or consume it cannot get it.With the use of keywords we can define dependencies between modules.

Please Note: "exports" and "require" are not keyword they are more of CommonJS specification.

So for it sequence would be, whenever compiler goes through the file and if "require" keyword is found. Thenthe compiler understands that exiting file is having dependencies on other file and in order to complete that dependency it will start locating the file in whichit gets corresponding "exports" keyword using the same path which is mentioned next to "require" specification keyword in order to get its job done.

As "exports" and "require" are just specification keyword and they are not JavaScript keyword. Due to that you cannot directly create JavaScript objectsin other words direct implementation is not possible and for that we need something more.

Whenever you wish to implement CommonJS you have to use open source frameworks ES6 module loaders like SystemJS, RequireJS and etc. Module Loaders are the ones who understand how to utilize and use "exports" and "require" keywords thereafter it can create object and load JavaScript files 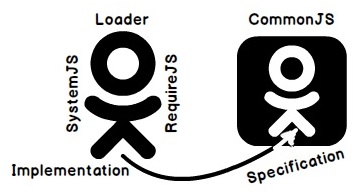 As promised do not forget to click on the following video link to learn CommonJS with practical code explanation in complete depth :-